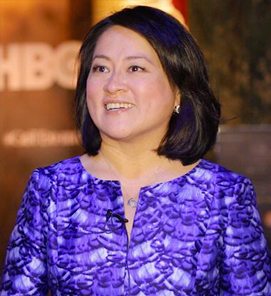 Sofia Chang is executive vice president & general manager for HBO Home Entertainment, the DVD and digital distribution division of Home Box Office, Inc.With offices in New York, London and Toronto, the company’s titles – ranging from current HBO critically acclaimed and groundbreaking series Game of Thrones to classic series like The Sopranos – are distributed in more than 70 countries around the globe. During her tenure at HBO, she has overseen the marketing of an extensive array of DVDs and led the development of several award-winning DVD advertising campaigns. As head of the Licensing & Retail area, Sofia was central to the expansion of HBO’s licensed products worldwide into Europe, South America and Asia, as well as new product categories including digital gaming across multiple franchises (including Game of Thrones).

Prior to HBO, Sofia was a brand advertising manager for Pacific Bell in San Francisco.  Previously, she worked in account management at the ad agencies Kirshenbaum and Bond and TBWA, both based in New York City, where she managed the Snapple and Evian accounts.

Sofia holds a B.A. in English from the University of Pennsylvania.

She is on the board of DEG (Digital Entertainment Group) and the Time Warner Foundation.