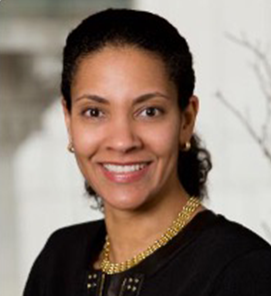 Sarah Dodds-Brown serves as Executive Vice President & Managing Counsel at American Express. She leads the Business Legal Group, which provides legal support for the company’s U.S. consumer, commercial services and global merchant and network services businesses, as well as the Global Advertising and Brand Management organization. These business divisions generate over $24B in annual revenue for American Express.

Over the course of her 14 year career with American Express, Sarah has been recognized as a strategic business partner who effectively challenges the status quo and creates momentum for change and evolution, and she has been instrumental in redefining the culture and expanding the engagement of the legal function at American Express.

For several years, Sarah also led the enterprise-wide legal Privacy & Data Governance function. In this capacity, she revolutionized the approach to privacy and data governance across the Company.  She set the agenda for the broader privacy organization during an extended transition period between Chief Privacy Officers and privacy counsel, leading the development of a principle and risk-based approach to how the Company partners with third parties, the design and implementation of the governance strategy for the Company’s “Big Data” capabilities and the development of the global online privacy statement strategy.  During the time of her tenure leading the privacy legal function, the Company was recognized six years in a row as ‘The Most Trusted Company for Privacy’ in a survey conducted by the Ponemon Institute. She has also been appointed to, and currently serves as an Adviser on, two American Law Institute projects focused on developing principles of law for data privacy and principles for a data economy.

Since the beginning of her career, Sarah has been active with educational and civic organizations.  She was elected and served as a “Young Trustee” on the Duke University Board of Trustees following her undergraduate studies and went on to subsequently serve two terms on the board of advisors for Duke’s Trinity College of Arts & Sciences. In 2006, Sarah was asked by the University president to serve on a specially created Presidential Council to scrutinize Duke’s response to allegations made against several members of its men’s lacrosse team. During a time of acute crisis for the University and incredible reputational vulnerability, she and the other members of the Council advised the president on whether Duke’s responses were appropriate and effective.  Sarah also served as an inaugural member of the Duke Women’s Impact Network Leadership Council, which is focused on strengthening the pipeline of women qualified for service on Duke’s volunteer leadership boards and broadening Duke’s understanding of women’s philanthropic motivations to better cultivate and engage women donors.

In 2011, Sarah was asked by the Mayor of the City of New Rochelle to participate on a joint City/College planning committee undertaken between Iona College and the City following the withdrawal by Iona College of a controversial and contested off-campus dormitory proposal.   Following her successful and influential role on the planning committee, she was appointed by the Mayor to the City’s Planning Board on which she is currently serving her third term and as Chair.  Sarah is also a member of the DirectWomen Advisory Board and serves as the Chair of the Legal, Policy & Risk Committee on the Board of Trustees of Rye Country Day School in Rye, NY.

Sarah began her career in private practice as an M&A and private equity lawyer at Paul, Weiss, Rifkind, Wharton & Garrison LLP in New York. She received her J.D. from Columbia University School of Law and her A.B. degree from Duke University.  She currently resides in New Rochelle, NY with her husband and three children.