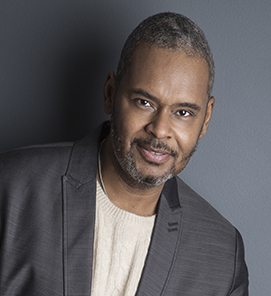 Ron Simons is a four-time Tony Award-winning producer, four-time Sundance Film Festival selected producer and actor of stage, film and television. Ron is the Founder and CEO of SimonSays Entertainment. Ron recently won his 4th Tony Award for the August Wilson hit Broadway show Jitney, under the category “Best Revival of a Play,” making him the highest African-American Tony Award winning producer of all time, and cementing him as the leading Broadway producer working today bringing diversity to the stage.

As CEO/President of SimonSays Entertainment, he leads the strategic planning and development of theatre and film projects including the critically acclaimed films Night Catches Us, Gun Hill Road, Blue Caprice and Mother of George (all of which premiered at Sundance). His first documentary 25 to Life premiered at the American Black Film Festival where it won Best Documentary. He also produced the Broadway productions of A Gentleman’s Guide to Love and Murder (Tony Award for Best Musical), Porgy & Bess (Tony Award for Best Revival of a Musical), Vanya and Sonia and Masha and Spike (Tony Award for Best Play, Drama Desk, New Drama Critics and Outer Critics Circle Awards for Best Play, Drama League Award for Outstanding Production of a Broadway or Off-Broadway Play), and A Streetcar Named Desire (AEA’s Extraordinary Excellence in Diversity on Broadway Award). Off-Broadway projects include Bedlam’s St. Joan and Bedlam’s Hamlet Awards (Off Broadway Alliance Award – Best Revival (for Saint Joan) and the Chicago production of 5 Lesbians Eating Quiche which received the FringeNYC Outstanding Production Award. Ron most recently received the Emerging Producer Award at the 2017 National Black Theatre Festival Opening Gala.

As the Tony Award-winning African American producer with the most wins of all time, Ron Simons is a highly sought out worldwide speaker, advisor and expert in keynotes and workshops educating filmmakers and artists on achieving success in the entertainment industry. Ron teaches artists what funders and producers seek at such prestigious organizations as Columbia University School of the Arts, Tribeca All-Access, Independent Film Project (IFP), Sundance Film Lab and the Black TV & Film Collective – igniting thought provoking exploration into the essence of ‘the why’ and ‘the how’ when pitching successful projects.

As an actor, Ron has appeared on stage, in film and television. He and fellow cast members won the London Stage Award for Acting Excellence for the play “Boy Steals Train” which he codeveloped. He has performed in numerous regional theaters including Cincinnati Playhouse in the Park, Seattle Repertory Theatre, Utah Shakespeare Festival and the Classical Theatre of Harlem. Film and television credits include Blue Caprice, Night Catches Us, 27 Dresses, Mystery Team, Phoebe in Wonderland, Law & Order, Law & Order: Criminal Intent, As the World Turns and Nowhere Man. Ron is a member of The Broadway League and the Screen Actors Guild. Ron also holds a membership with the elite Producers Guild of America (PGA), a non-profit trade group that represents, protects and promotes the interests of all members of the producing team in film, television and new media. Ron can next be seen in Netflix’s highly anticipated new cross-over Marvel series “The Defenders,” out August 18TH 2017.

Ron is also involved in many philanthropic efforts in New York and Seattle including Jazz at Lincoln Center, Hudson River Performing Arts Center, Technology Access Foundation and the University of Washington School of Drama to name a few. Organizations in which he currently holds a position on the board include the Hetrick-Martin Institute, Harlem Stage and the University of Washington Foundation Board. In addition, Ron has previously sat on the boards of UW School of Drama Advisory Board, Technology Access Foundation, Eastside Domestic  Violence, Classical Theater of Harlem, Columbia College Alumni Board, Columbia College Board of Visitors and the Eagle Academy Foundation. Ron’s corporate experience includes positions as a Software Engineer at companies such as Hewlett-Packard and IBM and as a Marketing Manager at the Microsoft Corporation. Ron is a recipient of the Heritage Award from Columbia College’s Black Alumni Council, 150 Distinguished Alumni Award from University of Washington, and is a Johnson & Johnson Leadership Award Fellow, IFP Cannes’ Producer’s Network Fellow and a Sundance Producers’ Summit Fellow. He holds a BA from Columbia College, an MBA from Columbia Business School and an MFA from the University of Washington’s Professional Actor Training Program.