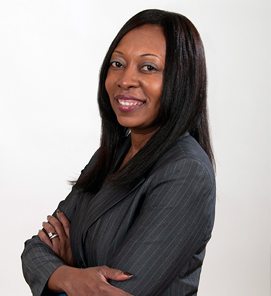 Ms. Anderson received her JD from Harvard Law School and a B.A. in Criminology from John Jay College of Criminal Justice, where she now serves on the Board of Trustees.

Ms. Anderson devotes countless hours to pro bono service, representing indigent criminal defendants, individuals seeking political asylum in the U.S. from persecution in their home countries, and victims of human trafficking.  An advocate for international criminal justice, she regularly provides pro bono assistance to the International Criminal Tribunal for Rwanda, assisting on genocide prosecutions, and advises the International Criminal Court on prosecutions for crimes against humanity.

Ms. Anderson’s professional achievements have been widely recognized, including by the New York Law Journal, which named her to its inaugural list of “2013 Rising Stars,” the National Organization of Women, which awarded her its “2012 Women of Power and Influence Award,” Crain’s NY Business Magazine, where she was named to its 2012 “40 Under 40” list of top achievers, and by Global Investigations Review on its 2014 “40 Under 40” list of the world’s leading investigations specialists.