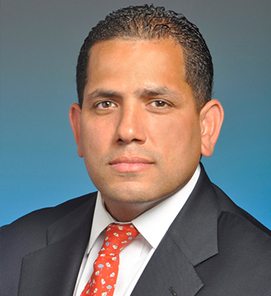 At RBC, Mr. Torres is very involved in business and people management. He is a member of the firm’s U.S. Investment Banking Executive Management Committee and Co-Chair of the U.S. Diversity Leadership Council. Additionally, Mr. Torres invests an enormous amount of time giving back to his community. He is a member of the Board of Directors of three prominent national non-profit organizations – Hispanic Federation, Council of Urban Professionals, and Latino Donor Collaborative.

As one of six children, Marcos experienced a very challenging childhood, including losing both his parents at a very young age, poverty and homelessness. It is in large part because of his incredibly challenging and humbling childhood experiences that Marcos remains vigilantly focused on making positive and impactful contributions to his community, including serving as a role model to underprivileged young people.

Mr. Torres has been recognized as one of America’s young and emerging leaders, given his professional accomplishments and contributions to his community. Among other recognitions, Mr. Torres is proud to have been featured in Hispanic Executive magazine, selected as a CUP Catalyst by the Council of Urban Professionals, and awarded Ballet Hispanico’s 2018 Civic Inspiration Award.