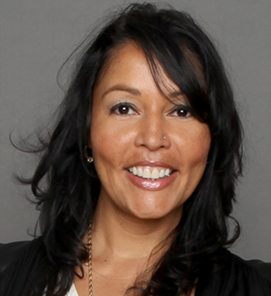 Lucinda Martinez is senior vice president, Multicultural Marketing, responsible for all HBO, HBO Latino, Cinemax and Max Latino branded targeted marketing efforts to the vast and steadily growing multicultural segments including the African American, Latino, Asian and Gay/Lesbian audiences. She was named to this position in July 2013.

An industry-recognized sales and marketing expert with more than 18 years of experience in media and entertainment, Martinez has a strong record of contributions in sales, marketing, new business development, new product launches, promotions and brand management. Among her many accomplishments at HBO, she has collaboratively led the network’s branding, acquisition and retention efforts in making HBO Latino the most recognized Latino premium channel on television, and has helped create meaningful, long-term connections to the HBO brands within the rapidly changing cross cultural marketplace.

Martinez joined HBO in 1995 as an associate manager, Marketing. After a brief stint outside of HBO, she rejoined the company in 2003 as director, Direct Marketing, and named director, Strategic Partnerships and Emerging Markets, in 2005. She was promoted to vice president, Domestic Network Distribution & Multicultural Marketing, in 2006, where she oversaw all subscriber growth and retention strategies for HBO, HBO Latino and Cinemax brands and products, as well as elevated HBO’s presence in emerging markets through targeted marketing efforts in partnerships with all of HBO’s major distributors.

Martinez serves on the NY Board of the American Heart Association (AHA), where she launched the first-ever Latino Health Summit to help reduce cardiovascular disease and promote heart health among the most affected. She is also an officer on the board of the Council of Urban Professionals and the National Association for Multi-Ethnicity Communications (NAMIC). For her work with AHA, Martinez received a 2011 Timer Warner Andrew Heiskell Community Service Award.

A resident of Harlem and super proud mom of two, Martinez holds a BA from Columbia University.