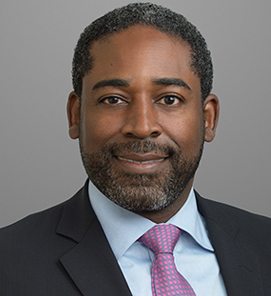 Joseph Drayton is a Partner at Cooley LLP and is an experienced trial attorney, who was named as one of America’s Most Influential Black Lawyers by Savoy Magazine, a National Bar Association Nation’s Best Advocate: 40 Lawyers Under 40 in 2011 and recognized on multiple occasions by IAM Patent 100 and National Black Trial Lawyers Top 100. Mr. Drayton has been a lead member of numerous patent trial teams and his practice background includes intellectual property and complex commercial matters.

Mr. Drayton is a Vice President of the National Bar Association, and Chair of the ABA Section of Litigation Minority Trial Lawyers Committee. Mr. Drayton is also a member of the ABA’s Federal Judiciary Committee  and the enhanced committee on diversity at the New York City Bar. He is a past President of the Metropolitan Black Bar Association and a former board member of New York County Lawyers Association. The New York City Bar honored Mr. Drayton with its Diversity Champion Award in 2014.