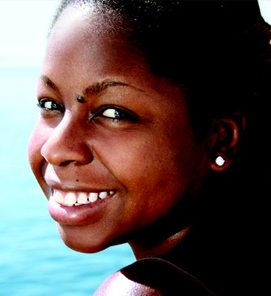 Veronica Chambers is the Founder & Principal of Lightbulb Ink, LLC. She is a prolific author, best known for her critically acclaimed memoir, Mama’s Girl which has been course adopted by hundreds of high schools and colleges throughout the country.

Her most recent non-fiction book was Kickboxing Geishas: How Japanese Women Are Changing Their Nation. Her other non-fiction books include The Joy of Doing Things Badly: A Girl’s Guide to Love, Life and Foolish Bravery. She has also written more than a dozen books for children, most recently Celia Cruz, Queen of Salsa and the body confidence Y/A novel, Plus.

Veronica spent two seasons as an executive story editor for CW’s hit series, Girlfriends and earned a BET Comedy Award for her script work on that series. She has also written and developed projects for Fox and the N.

Veronica has contributed to several anthologies including the best-selling Bitch in the House, edited by Cathi Hanuaer and Mommy Wars, edited by Leslie Morgan Steiner.

A graduate of Simon’s Rock College at Bard, she and her husband have endowed three scholarships at the college in the fields of music and literature.

She has been the recipient of several awards including the Hodder fellowship for emerging novelists at Princeton University and a National Endowment for the Arts fiction award.