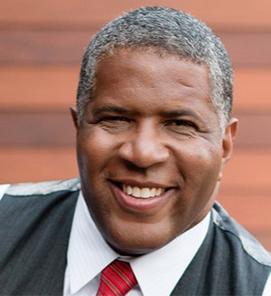 Robert F. Smith is an investor, philanthropist and believer in human potential. As the Founder, Chairman and CEO of Vista Equity Partners, he directs the firm’s investment strategy, governance and investor relations. Prior to Vista, he worked at Goldman Sachs in technology investment banking, where he facilitated mergers and acquisitions for large technology companies, including Apple and Microsoft, among others.

Smith has been recognized for his business achievements and philanthropic efforts, including being named one of Forbes’ 100 Greatest Living Business Minds and a recipient of the Carnegie Medal of Philanthropy. He supports several organizations through different roles, including Chairman of Carnegie Hall’s Board of Trustees, Chairman of Robert F. Kennedy Human Rights, Member of the Board of Overseers of Columbia Business School, Member of the Executive Committee of Business Roundtable, Member of the Cornell Engineering College Council, Trustee of the Boys and Girls Clubs of San Francisco and is a Founding Partner of REFORM Alliance. He is also the founding director and President of the Fund II Foundation, which is dedicated to preserving African American cultural richness, promoting human rights, investing in music education, and conserving the environment.

Smith frequently gives talks on finance, entrepreneurship, technological transformation, inclusiveness and related topics at a variety of venues, such as the World Economic Forum Annual Meeting in Davos, Switzerland. He has also been interviewed by numerous media outlets, including CNBC, The Washington Post, Masters of Scale podcast, and others.

Smith earned a B.S. in Chemical Engineering from Cornell University in 1985 and an MBA from Columbia Business School in 1994.