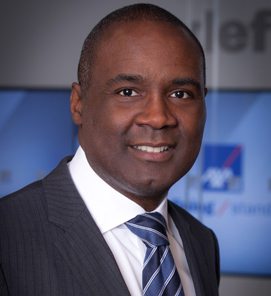 Kermitt Brooks serves as the Deputy General Counsel for AXA US, where he heads the Insurance Practice Group and the Government Relations Practice Group in the Law Department.

Prior to joining AXA US, Mr. Brooks served as First Deputy Superintendent and Acting Superintendent for the New York State Insurance Department. He also served as Deputy Attorney General for Operations at the New York State Office of Attorney General. Mr. Brooks’s early career included serving as Counsel at Metropolitan Life Insurance Company, and as Commercial Litigation Associate at Nixon, Peabody, LLP. Mr. Brooks is currently a board member of the Insurance Federation of New York, and of the Association of Life Insurance Counsel, where he is Co-Chair of the Corporate Section.

Mr. Brooks received his Juris Doctor from the University of Michigan Law School, where he was a Contributing Editor of the Michigan Law Review, and a Bachelor of Arts in International Relations from James Madison College at Michigan State University.