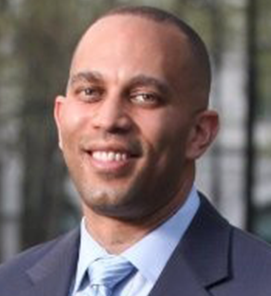 Congressman Hakeem Jeffries has proudly represented New York’s Eighth Congressional District in the House of Representatives since January 3, 2013. His district is among the most vibrant and ethnically diverse in the nation, with more than 20 languages spoken by residents and immigrants from around the world.

Hakeem currently serves on the House Judiciary Committee (including the subcommittees on Courts, Intellectual Property and the Internet and on Regulatory Reform, Commercial and Antitrust Law) and the House Education and the Workforce Committee (including the subcommittees on Higher Education and Workforce Training and on Health, Employment, Labor, and Pensions).

Through his industrious committee work and thoughtful advocacy in the public square, Hakeem has been at the forefront of a wide range of progressive causes, including protecting and expanding the middle class; championing quality education for our children and young people; advancing workable affordable housing solutions; combating gun violence through common sense gun control legislation and enforcement; and fighting for a fair minimum wage. He has also successfully led bipartisan efforts to reform our criminal justice system and protect inventors, tech entrepreneurs, and small businesses through sensible patent reform legislation.

In January 2015, congressional leaders appointed Hakeem as Whip for the Congressional Black Caucus and as a member of the influential Democratic Steering and Policy Committee.

Prior to Congress, Hakeem served for six years in the New York State Assembly. Before serving in elective office, Hakeem practiced law at Paul Weiss, and then as litigation counsel for Viacom and CBS. He holds a JD from New York University Law School, a master’s degree in public policy from Georgetown University, and a bachelor’s degree from the State University of New York at Binghamton.