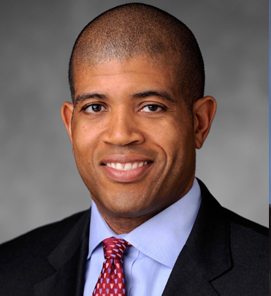 Don Cornwell is a Managing Director in Morgan Stanley’s Investment Banking Division. Specifically, he works in the Mergers & Acquisitions Department, based in New York. Since joining the firm as an associate in 1998, Don has executed a broad range of financial advisory assignments. Don has established a particularly focused area of expertise in media and entertainment, specifically in sports and gaming. Don leads Morgan Stanley’s Investment Banking sports practice.

Prior to Morgan Stanley, Don worked as a management consultant in the New York office of McKinsey & Co. and in corporate development for the National Football League.

Don received a MBA from Stanford University’s Graduate School of Business and an AB in government from Harvard College. He grew up in Brooklyn, New York and attended the Trinity School for high school. He currently resides in Manhattan. He sits on the Board of Trustees of the East Harlem Tutorial Program, an after school program for children in East Harlem, and the Community Roots Charter School, a charter school in Ft. Greene, Brooklyn. He is also a member of the Council on Foreign Relations.