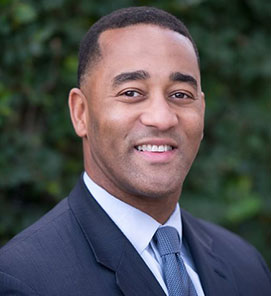 Barry G. Simmons is a Managing Director and the Head of the East Division for Chase Wealth Management at JPMorgan Chase & Co.  He currently leads a team of over 1,400 financial advisors across 1,500 branches in NY, CT, NJ, GA, FL, OK and LA. He also serves as a co-chair for the Black Executive Forum, (BEF).

Prior to that Simmons was the Head of California Consumer & Wealth Management for JPMorgan Chase & Co.  He lead a team of over 10,000 people across 1,000 branches in California.

Simmons joined JPMorgan Chase & Co. in 2016 as the Head of Card Customer Service, responsible for leading a team of 6,000 people across the United States and International territories.

Before joining JPMorgan Chase & Co., Simmons was the Wealth Management Executive for Enterprise Business and Community Engagement responsible for driving integration efforts for US Trust and Merrill Lynch with all lines of business across Bank of America.  In addition, he served as an Executive Sponsor for the Black Professional Group, (BPG).

During his time in Wealth Management, Simmons was also the Associate Market Executive for the New York Metro Division with Merrill Lynch Wealth Management.  He was responsible for leading key business initiatives across the division and the Fifth Avenue market office.

Simmons graduated from the University of Virginia where he majored in Communications and has his MBA in finance from the University of North Carolina Chapel Hill – Kenan-Flagler Business School. He also serves as a board member of the Council of Urban Professionals, One Hundred Black Men, INC. of New York, Los Angeles Urban League, and Junior Achievement of Southern California.