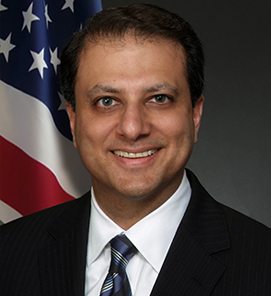 Preet Bharara was nominated on May 15, 2009 by President Barack Obama to become the U.S. Attorney for the Southern District of New York. Mr. Bharara’s nomination was unanimously confirmed by the U.S. Senate on August 7, 2009, and he was sworn in on August 13, 2009. As U.S. Attorney, Mr. Bharara oversees the investigation and litigation of all criminal and civil cases brought on behalf of the United States in the Southern District of New York, which encompasses New York, Bronx, Westchester, Dutchess, Orange, Putnam, Rockland, and Sullivan counties. He supervises an office of more than 210 Assistant U.S. Attorneys, who handle a high volume of cases that involve domestic and international terrorism, narcotics and arms trafficking, financial and healthcare fraud, public corruption, gang violence, organized crime, and civil rights violations. Mr. Bharara graduated magna cum laude from Harvard College with an A.B. in Government in 1990, and from Columbia Law School with a J.D. in 1993, where he was a member of the Columbia Law Review.