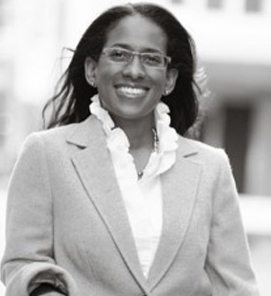 Binta Brown is a corporate lawyer, startup advisor, human rights advocate and bass player, who is researching the intersection between business and human rights as a Mossavar-Rahmani Senior Fellow at the Harvard Kennedy School (Harvard University), in addition to advising 12 different early stage technology companies. Binta has been recognized as one of The Root’s 100 Most Influential African-Americans, Fortune Magazine’s 40 under 40 business leaders, JET Magazine’s 40 under 40, Crain’s New York 40 under 40, by the National Organization for Women as a Woman of Power and Influence, and by the World Economic Forum as a Young Global Leader. She has been featured in Real Simple magazine on mentorship, and on CNN. Binta sits on a handful of boards including: Barnard College, Columbia University; Human Rights First, the American Theatre Wing (founder of the Tony Awards (c)) (where she is also a certified Tony voter), the New York City Parks Foundation, and the Harvard Women’s Leadership Board. Binta sits on advisory boards to National Public Radio (Generation Listen) and the Somaly Mam Foundation, and is a member of the Council on Foreign Relations.